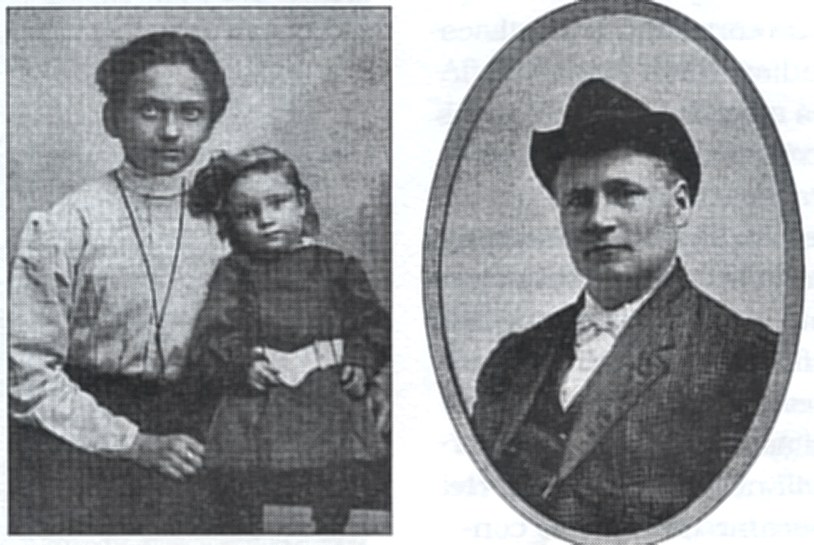 Three persons on the Filpus family tree sailed on the Titanic:

Reverend and Mrs. Lahtinen were returning from a visit to Finland, accompanying her cousin Lyyli, who was immigrating to the United States. They were sailing in second class and reached a lifeboat after the collision with the iceberg. The Reverend was not allowed on the lifeboat, because the lifeboats were woman and children only at the time. Anna would not leave her husband. Lyyli watched them on the deck as the lifeboat lowered. She remembered that the Reverend stood stoically with a cigar clenched in his teeth. Other survivors described the Reverend comforting those on the deck as the ship sank. Their bodies were not found. Lylli arrived in New York on the Carpathia and went to stay with Anna's brother Carl A Silfven and his wife Anna Lydia (Filpus) Silfven in Hancock Michigan.

Nils and Elvira Filpus, as part of their union activities, joined the Communist party while working in Detroit. In the early 1930's, the Soviet Union offered incentives to ethnic Finnish Communists to settle in Karelia SSR. The family emigrated in 1933.  In 1933, the Stalinist Secret Police become distrustful of the non-native Finns. They were arrested en masse and convicted of trumped up treason charges. They were taken out to the Sandermokh forest, where they were forced to dig mass graves and then were executed.

Military Order of the Purple Heart of the U.S.A.

Richard Golick was a founder and Chairman of the Military Order of the Purple Heart Service Foundation, Inc. He organized the Purple Heart Service Foundation, a philanthropic group that has raised and spent millions on programs related to the service, rehabilitation, and welfare of veterans and their dependents. The Foundation's missions expanded into community action programs, such as disaster relief and arranging for the care of abused and disabled children. His wife, Paula (Filpus) Golick, was the daughter of Nils and Elvira, who had emigrated to the Soviet Union.

Olavi Kantola, son of Axel and Alma (Filpus) Kantola, served in the Abraham Lincoln Brigade in Spain, fighting with the resistance against the Fascists. He was killed in Gandesa during the retreats.

My Life as a Dog and Other Movies

Donna Matson, whose great-grandmother was a Silfven, was cocreater of the award winning movie, My Life as a Dog, with her first husband, Reidar Håkan Vallis Jonsson. Her second husband, Paul C Babin, was a noted cameraman, who worked on projects including The Abyss (1989), Terminator 2: Judgment Day (1991), True Lies (1994), and T2 3-D: Battle Across Time (1996).

In January 2005, two days before President George W. Bush’s second inauguration, a Michigan man named Lowell Timmers drove an old van into downtown Washington, D.C., parked it one block from the White House, at the intersection of Pennsylvania Avenue and 15th Street NW, and announced that his van was wired to explode. Soon, police and Secret Service agents had evacuated nearby buildings, established a perimeter, and surrounded Timmers, who was holding something he claimed was a trigger and making various demands. After several tense hours, Timmers surrendered peacefully and the city returned to normal. Nobody was hurt. Lowell's wife, Gloria (Jouppi) Timmers, was a niece of grandaunt Gert (Hannula) Jouppi.

Major General Rodney Hannula, assumed duties as Commander, 34th Infantry Division, Minnesota Army National Guard on April 4, 1998. He commanded the more than 15,000 members of the division in Iowa, Minnesota, North Dakota and Wisconsin. The division also has units in Colorado, Illinois and Michigan. The 34th 'Red Bull' Infantry Division is headquartered in Rosemount, Minnesota.
The General's military service began in 1957, as a Combat Engineer in the Wisconsin Army National Guard. He graduated from the Wisconsin Military Academy in 1961 and was commissioned a Second Lieutenant in the Wisconsin Army National Guard. Prior to serving as the Division Commander, Major General Hannula served as the Deputy Commanding General North, First U.S. Army and the Assistant Division Commander for the 34th 'Red Bull' Infantry Division.

Song writer and performer. She performed at the Diamond Lil Show in Pleasure Island and at Freedomland's Opera House and Saloon. She performed on several musical soundtrack albums. She was married to Albert Elias, a music composer. Her uncle, Edward Lemponen, was grandmother Minnie (Kaskinen) Lemponen's second husband.

Flags of Our Fathers

John Henry Bradley was a United States Navy Hospital corpsman who was awarded the Navy Cross for extraordinary heroism in combat on February 21, 1945 while assigned to a U.S. Marine Corps rifle company during the Battle of Iwo Jima in World War II. Bradley was one of the members of the combat patrol that climbed, captured, and helped raise the original U.S. flags on top of Mount Suribachi on the morning of February 23, 1945. Until June 2016, Bradley was incorrectly identified as being one of the six men raising a second, larger flag about 90 minutes later, though he was still on the mountaintop and witnessed – but was not part of – the specific moment of raising the larger flag that was captured in the Pulitzer Prize-winning photo Raising the Flag on Iwo Jima taken by Associated Press photographer Joe Rosenthal. His story was related in the book, Flags of Our Fathers, by his son James. James's brother Thomas John Bradley married Laurel Ann Johnson, whose great-grandmother was Anna Lydia (Filpus) Silfven.

General Simelius fought in World War II. He served as Chief of Defence for the Finnish Defence Forces between 1959 and 1965. He married Alli Emilia Kiianlinna, who was a half 6th cousin of great-grandfather Frank Kaskinen.